The Most Reviled Form of Art 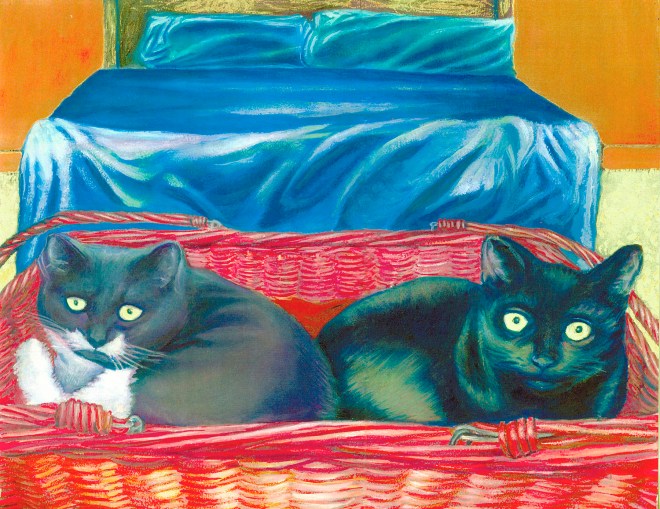 Portrait of Coco and Josephine, gouache and acrylic on watercolor paper, 16″ X 20″

There’s probably no more reviled form of art than the pet portrait. I’m not sure why, exactly. Even velvet Elvis paintings have a certain amount of kitsch cache. You never really know what will be looked down on in the art world. I worked as a drawing class model for awhile and there’s a lot of stigma in that too. Sometimes, the same people that are drawing you, are also looking down on you. Even though the nude is an honored tradition in art, there’s an assumption that somebody who takes their clothes off for money must have some kind of problem. Or, if not, they are probably trying to create one. In reality, the opposite is true when you’re working for a drawing class. Figure modeling is one long effort to prevent problems: in your back, your neck, your knees, or whatever.

I did the above portrait of Coco and Josephine for Kate Westray, a friend who gave me a set of flat files. Those are the kind of cabinets made for large works of paper (drawings, watercolors, etc.). It wasn’t a trade. She just offered to give me the flat files and I wanted to do something in return. Flat files are expensive. Even if you want to get rid of them, they’re worth quite a few bucks second hand. So I wanted to repay what I felt was a great act of generosity. I was doing the Modern Venus paintings at the time, but I didn’t offer her one of those, as I had a feeling  (speaking of stigma) that the Venus’s weren’t the sort of thing that she would want to hang on the wall. As it turned out, neither was my portrait of Coco and Josephine. Although Kate said she liked it, she ended up giving it back to me.

Even though it does belong to most despised form of art (as I mentioned), I like it too, though I admit it’s an odd creation. I set about to do the painting exactly the same way I approached  my Venus’s — with solid blocks of intense pin-up color, composed  in the manner of  modernist abstraction. But being a portrait, I had to include their faces. Faces (at least to me) remove the ambiguity between abstraction and representation, that I was playing with in the Modern Venus series.

As soon as you’re looking straight at a face, the identity of the sitter overrides any perception of shapes and colors. Coco and Josephine were rescue cats and they didn’t like strangers. Whenever I saw them, they looked at me in the querulous (slightly berzerk) way that I showed in the painting,  then quickly took off for a safe place.  So, in retrospect,  it’s really no wonder Kate didn’t want this on the wall,  as Coco and Josephine were a lot happier looking when she was alone with them. Happy is the way you want to remember the things you love, not berzerk.

This part of the weekly Post Week of April 15 – 21 Complete. The Most Reviled Form of Art, Cezanne Gets the Last Laugh, Maria Maria, & More Modern Venus. If you want to read it click here.